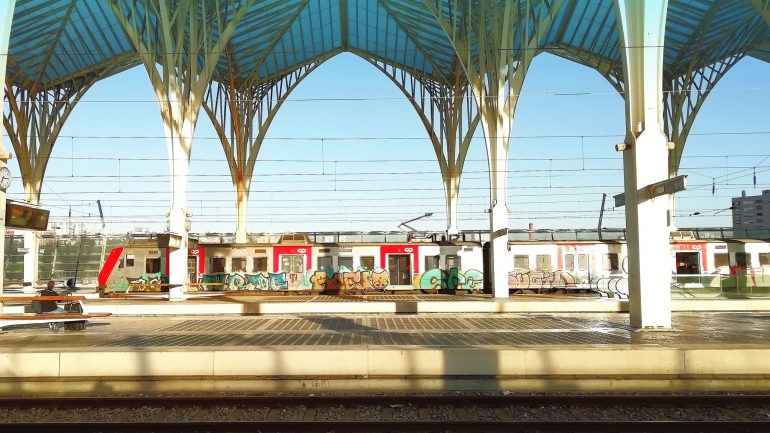 Two years ago, I decided not to fly anymore within the borders of Europe. Despite the ion that the number of air travellers will double to 8 billion people worldwide.

So it’s a personal choice. After graduation, I flew to New Zealand, according to Greentripper good for almost 8 ton of emissions while we should just emit 2,1 ton per year if we want to achieve the climate targets for 2050.  I have to compensate for something because after that first trip I kept on travelling, it became a part of my job and a part of my identity. Davy too was travelling a lot between Brussels & Dakar, at that time. Our last long flight dates from 2015 to Jamaica — when marihuana was decriminalized on Bob Marley’s Birthday. Boy, that Island knows how to party!
The reason is not only because we moved to Portugal and bought an abandoned Quinta but also because our view on travelling changed. Travelling became almost a compulsory thing, shattering local nature & customs. Now, we prefer to spend our holidays, especially during season, at home, with events and everything we need nearby.
But the real trigger for me was when I saw a life tracker of all the flights above Europe. And if you know that Europe is profiling itself as the historical museum of the world you can guess that flights from Hong Kong, Moskou, Dubai & USA will only double.

Since my decision, I travelled twice to Belgium and once to Valence, and I loved it. The night train from Lisbon to Hendaye (about 1000 k’s) costs 75 euro. From Hendaye to Paris (800 k’s in 5 hours) costs about the same, depending on when you book. I think that’s a reasonable price. From Paris to Ghent is not only very expensive but also logistical problematic. The last time, I got off in Paris (6 pm), booked a hotel and left in the morning with a Flixbus. This was less expensive and more relaxing since the train connections are not interesting. The cheapest trip between Porto & Ghent were 160 euro one way. The most expensive 256 euro (reduced to 180 euro because of the Flixbus, hotel excl.) Is this expensive? I feel it is more honest concerning the ecological cost, that still is not included in our economical plan, even though it’s an ending ‘product’. And if you compare it with flying, which costs sometimes 35 euro one way, it is expensive… But I don’t feel good about these cheap flights. Someone will pay for it lly.

Time is relative
Another remark I often get is that it takes too long to go from point A to B. Being on the road, for me, is a way of unwinding. In my travel days, I took long train rides through India & Russia and also now this trip of 22 hours is a mental break from the world. I have time to breathe, read, write, talk,… Just me and my thoughts. It is proven that it is healthier to arrive slowly to your destinations because you can adapt to your new situation.
Plus, the TGV, in second class, is a true luxury; I have more legroom, a USB port, a plug, an own desk for a laptop, and extra space for pens & books. There is free WIFI so I can work as much as I want, or if I prefer to walk & talk I can go to the modern restaurant coach. So yes, for travels under 1000 k’s I am pro trains. No traffic, no possible accidents, no stress and more space for luggage without extra costs. The distance between Porto and Ghent is 1800 k’s so there’s a night train involved to cross Spain which is not really a loss of time since it is after office hours and during the night. It depends on (my) changing priorities & perception. The fast lane? Thank you, next. I enjoy staring to the changing landscape, being on the road, meeting people and hopping off in the middle of Paris, Madrid, Lisbon or Biarritz without any extra costs ( you have to book your seats beforehand).

What could work better, is the food. While switching between trains there is hardly time to have a proper meal (good connections though!). There are not many healthy alternatives and fast snacks are quite expensive. Also in the restaurant coach, options are poor and wrapped in plastic. I always make my own salad with leftovers, my own salted snacks and Ice-tea. Travelling can be exhausting and good food a boost. A happy moment during the long ride. By the way, my best coffee EVER was on the Portuguese night train at 8 AM in the morning, driving through the mighty Pyrenees and listening to Wham and Paula Abdul on the radio in the bar. The breakfast on the night train is okay if you like your eggs and a piece of meat.
The only thing that doesn’t work well for me is all those people in my personal space. I really need to get over that because I am not always good company for my female in the sleeping . But okay, earplugs and headphones (essentials!) help.

NMBS: a trainwreck
And finally, we have our own NMBS. It’s normal that Belgians have a negative connotation with travelling: Service is poor, connections are bad, the seats and toilets are than the Spanish, Portuguese and French ones. Last time I was in Belgium I waited for delayed trains due to a fire, a loss of a couch and a derailment, all in one week, lol). NMBS; it’s a train wreck. Plus, I don’t feel very safe taking the first or last train in Brussels, a friend of mine got almost robbed waiting for her train to . She had to hide and nobody was there to help. It only raises the why investments in our railways are so poor because cities like London, Paris, Hamburg, Berlin and Amsterdam are close by and demand is huge.

This said; Davy flies to Brussels for his work. Meetings & contracts don’t wait. And even though I said I will only travel by train, sometimes circumstances will demand to fly. This is not hypocrite, but about not being too hard on ourselves and about finding a balance that works for us. Every bit helps; a meat lover that eats once a week vegetarian, a vegetarian/ vegan that eats meat once a week…People living zero waste but flying a lot, people who avoid flying but use plastic bags: It’s okay. We do what we can and we only live once.

PS: I am not against flying itself, it’s the pollution we have to tackle if we double the number of flights. We need clean energy & better prices/ subsidies for trains.