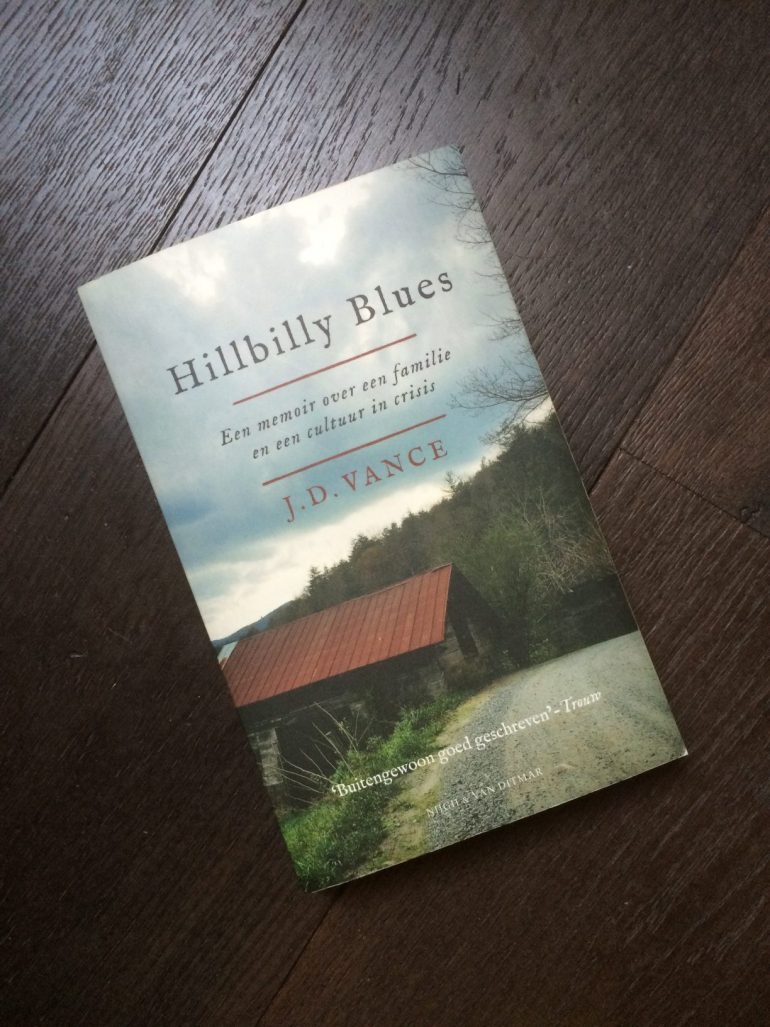 For a Belgian, the Portuguese, southern mentality often feels irrational. Hillbilly Elegy by J.D. Vance has nothing to do with Portugal and everything with white, American working class. But it did show me that we measure other communities with the wrong criterions.

“The book is an empathic, sharp analysis of the rednecks and the class-ridden society of America.” “A necessary book of an insider who fought his way through vertical mobility.” Read the critics of all the big magazines and newspapers. They are right.

Vance starts his book with an anecdote about a twenty-year-old guy with a pregnant girlfriend who got themselves a necessary job in a tile factory. The girl hardly showed up and the guy- when he showed up, always took long (sanitary) breaks during the day. When he got fired after a couple of weeks, he was completely taken by surprise and got furious: “Don’t you realize I have a pregnant girlfriend?!”
Another story: when a truckdriver indirectly insults the wife of Vance’s uncle, his uncle attacks the truck driver with a chainsaw.
As a kid, this violent lifestyle felt pretty normal and it is only until he starts working in a supermarket that he realizes that the ‘outside world’ acts quite differently. When he comes home he asks his grandmother (mamaw) why only poor people buy bottle food. “Rich people have kids as well?” Mamaw can’t answer his question and it’s only after a while they understand that rich people tend to breastfeed more often… Another world. But that outside world also doesn’t understand anything about that white working class from the hills. When the Salvation Army puts pyjamas on the Christmas lists for a child who Vance adopted, he doesn’t feel like buying it: “Pajamas? Poor people don’t wear pyjamas. We fall asleep in our underwear or blue jeans. To this day, I find the very notion of pyjamas an unnecessary elite indulgence, like caviar or electric ice cube makers.” Social workers who are supposed to help children like Vance are often “ another obstacle to be conquered.” Children disappear in a system with home inspections and counselling from family coaches who threaten with graduated foster homes. They underestimate the family ties with uncles, aunts, nephews,… It’s pure horror for a kid.

“Not to know things that so many other people do know, can have serious economic consequences.”

What is that, normal?

Vance doesn’t entirely blame the government that gives enough ‘chances’ with their scholarships, low-interest loans, pensions & subsidies. The cause for poverty needs to be found much earlier where kids in poor households are always ready to fight. Their brain that deals with stress and conflict is always activated. A lot of these children don’t realize what is normal and are conditioned to trust nobody. They see kindness as a tool to manipulate and therefore distrust it. Words are weapons and denial a strategy to survive. “ Those strategies help you survive as a kid, but in the grown-up world they turn against you,” writes Vance- who, by then,  graduated from Yale and worked for the Senate.
But he also blames his community to play the role of victims. The Appalachians don’t expect too much of themselves. Psychologists call it “learned helplessness” when a person believes that the choices he made have no effect on the outcomes.” But for him to make better choices, he needs to live in an environment that forces him to ask tough questions about himself.” Obama strikes at the heart of their deepest insecurities. His status in life is directly attributable to the choices he’s made. He is a good father while many ‘rednecks’ aren’t. He wears suits to his job while they wear overalls. His wife tells them that they shouldn’t be feeding their children certain They hate them for that because they are right, ” Vance explains.

“What separates the successful from the unsuccessful are the expectations that they had for their own lives.”

Knowledge is understanding, and vice versa

So… What does this have to do with Portugal? The first time I drove back home at night a cyclist was driving without a light on the emergency lane, close to the first lane. A classic view. Portuguese park their cars on busy roads to go shopping, not realizing they block traffic behind them. Their environmental awareness is zero and babysits are almost non-existing, most of the entrepreneurs don’t have a website but a Facebook page. If you don’t have an account you (and they) can’t do business. Explaining these habits by saying that this is ‘typical southern, lazy mentality’ or that it’s ‘too hot to act in such countries’ is too simplistic to accept. Wrong criterions. North Europeans (to whom I belong) tend to see the world too much through their own eyes but judge a whole, diverse world with it: from refugees who lost money & identity to second-generation immigrants and Miss Belgium 2018,…
What I realized as well, is that when one feels like moving on in life, he has to let go his old identity. Something we struggled hard with, in the past year, and we aren’t even poor or refugees. Knowledge leads to understanding and is a powerful tool. If you know that only one generation ago, Portugal was still a dictatorship and that the minimum wage here is 2,80 euro/hour (hello Europe!) you understand the ‘odd’ Portuguese choices to have a ‘passive’ lifestyle, to keep everything in the family or to communicate through Facebook ( general point of view, a lot is changing fast in the cities). But just like Vance I agree that it is wrong to play the role of the victim and to keep on blaming the government. Portuguese buy a lot of discounts they don’t need & they don’t need the government to realize that burning forests are a risk for communities.
Vance says he doesn’t know the answer for his community, which changed from old-fashioned, quietly faithful, self-reliant, hardworking (his grandparents) to consumerist, isolated, angry, distrustful (his mother). “But,” he says, “I know that from the moment we stop blaming others like Obama or Trump & anonymous companies, we can start asking ourselves what we can do to improve our world.”

In the end, we all want the same: be loved and accepted.

Knowledge & understanding. It probably sounds pretentious but it is one of the reasons why I started this blog. Showing what is in the offing if we (can) make conscient choices.