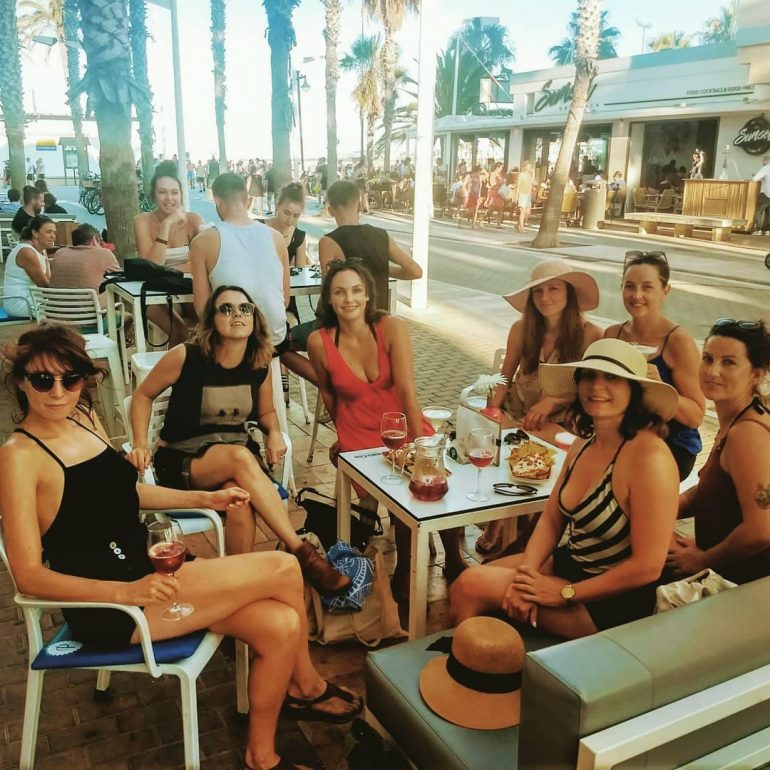 Last year, I wrote about seven women who became my muses in just a couple of days. Muzes are goddesses, guards of art & culture. But for me, they became the gatekeepers of my own sensuality. Last month we were together again for some days, on a rooftop in Valencia…

These women. It seems so easy for them. The way they walk, talk & dress. So feminine. When you’re new to a group, you observe things from a distance. And of course they act like women: they are women. But not every woman possesses the sensuality that I witnessed on them. And they have it all seven in their own individual way. Some are more modest, spirited or complex than others. But they all have GAME. Except for me. That’s why they are so fascinating to watch at the poolside or on the couch in the morning.  One admires in others what she lacks herself. Or is jealous, but luckily the latter is not a quality I have (I actually have zero tolerance for jealous people). But okay, what I also lack is GAME (zero game 😉 ). If a handsome man comes up to me to have a mating talk, I get armpits like marl caves and look like a school- miss with terrified manga eyes! I am afraid, in this case, I am a girly tomboy. Pippi Longstocking instead of the women from Drake’s Nice for what: Issa Rae (check her series Insecure!), Misty Copeland, Tracee Ellis Ross, Olivia Wilde… And although I adore Miss. Longstocking and will bravely save my friends from the hands of a rebellion army on an Appaloosa horse, or sign voluntary with the resistance; seeing a woman selling her goods in a playful & self-assured manner is just gutsy.
I should have met these women 15 years earlier! 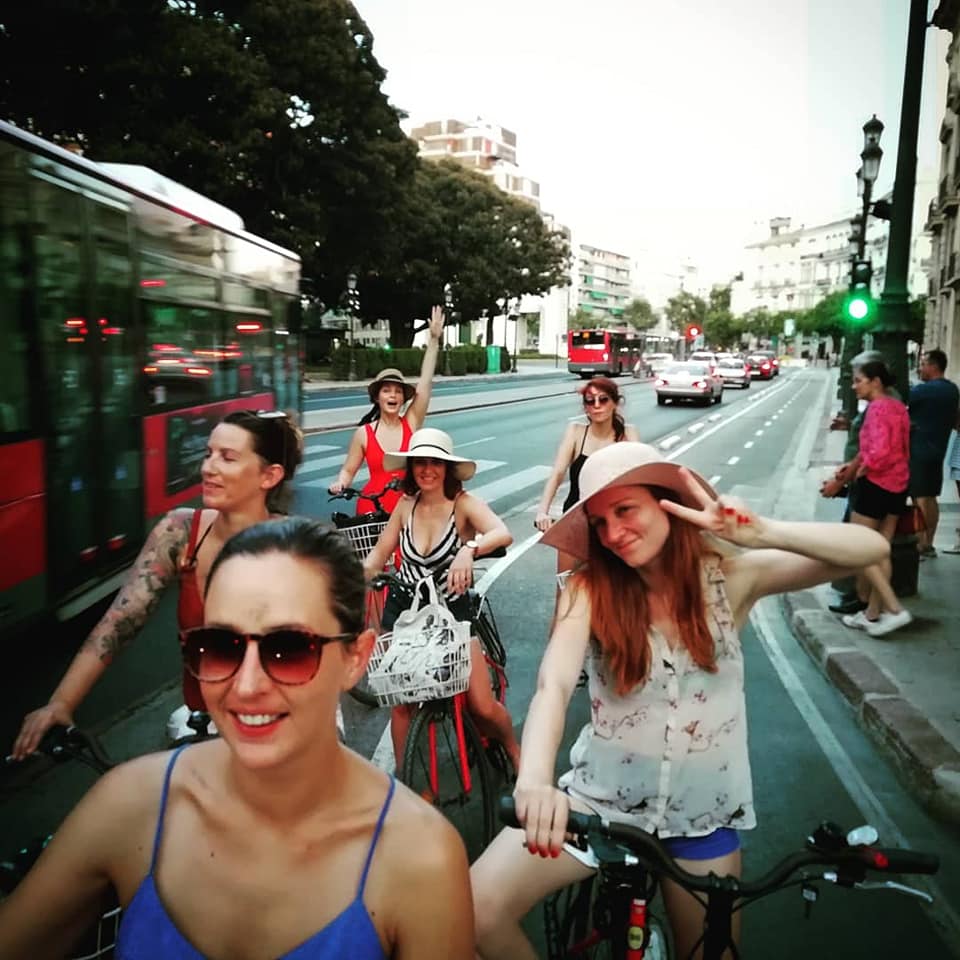 Not that we haven’t talked about sex… I mean, by the end of those five days not many taboos remained intact. From women-friendly porn, sexting, the most beautiful penis in the world to polygamy, twerking on parties & PMS… But this post isn’t about sex. Sexuality has a masculine connotation to me. Sensuality is more feminine. A garden of Eden without its master.
On the second evening, four of us stay in the city centre on a terrace. After hearing these girls talking about ardent subjects, another kind of consciousness arises. I start telling things I’ve never talked about before. Youth sins and things I am pretty embarrassed about. But I am surprised with the ease I am opening up to them. Because nobody is judging. 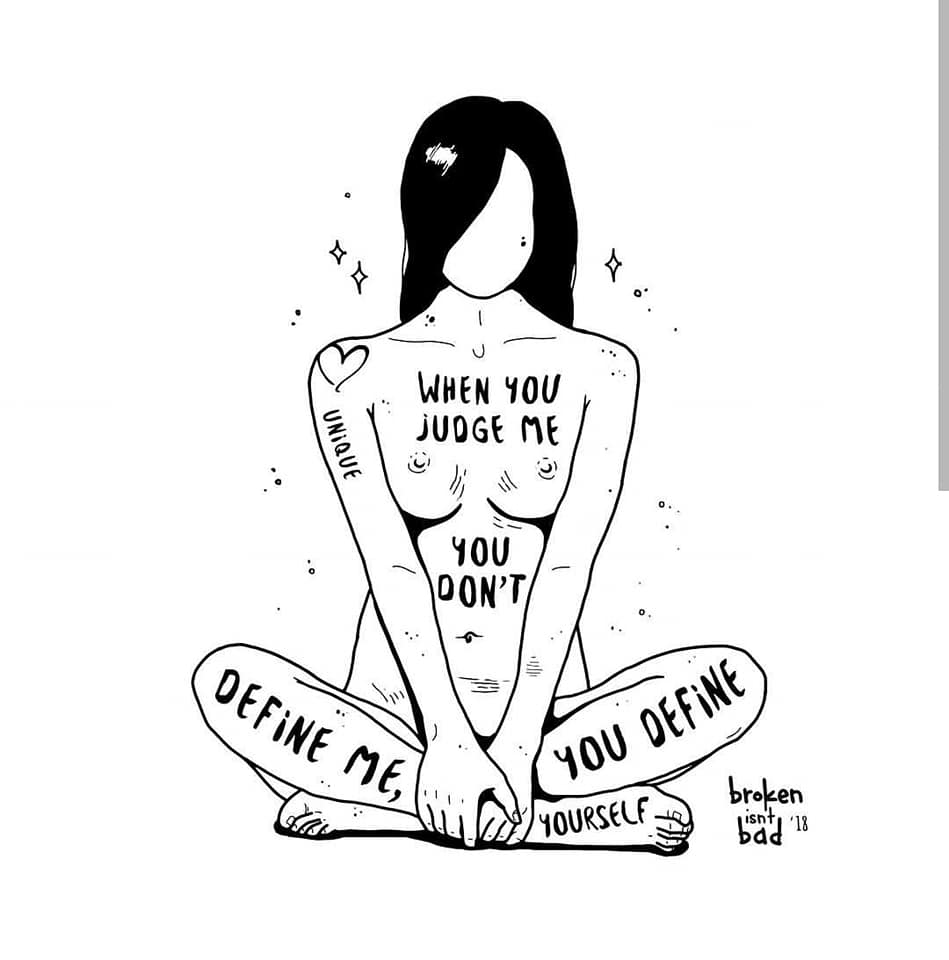 In my first blog post about these women, I wrote about the freedom it creates to be surrounded by women (or men) who are that straightforward; there is no room left for gossip, tensions or misunderstandings*. I think all these girls agree because they defend this balance between vulnerability & self-assurance like amazons. Like a pack. Something in me softened or awakened after that evening.

Something else what occurred to me during the city trip is the ease with which everything evolved. That’s the big advantage of having no hidden agenda’s or tensions. There were no rules about who will prepare breakfast, no debate about who will have the biggest room, no strictness about day planning or money, no rivalry, and so on… Actually, just like it is when I spend time surrounded by men. No nagging or consultation, not having to be careful with how you say things… No stress. Whomever who wants to be alone or with two to have a coffee can do so. On the last day, I spent half of the day in bed reading & sleeping, and didn’t have to explain myself about it. Charging batteries on your own while being together. I think this is how I want my friendships to be. And I think the men who are dating/married with/ to these women are very lucky, except on PMS dayzzz woohaa!
And let us turn this story around as well: I want my male friends like my girlfriends: being able to talk with them, mmhahaaa! Despite all the gender issues lately, I believe that men & women are growing closer. It’s always cool to see this in real life: a sensible gentleman instead of a macho and a woman that empowers you instead of seeing you as competition. 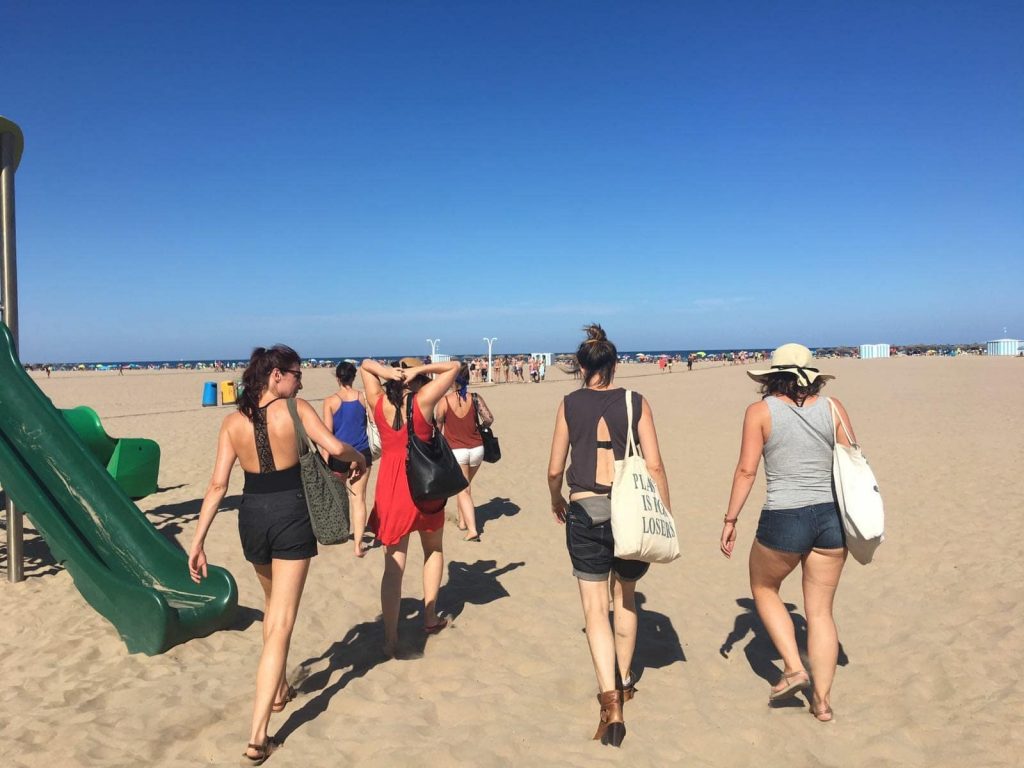 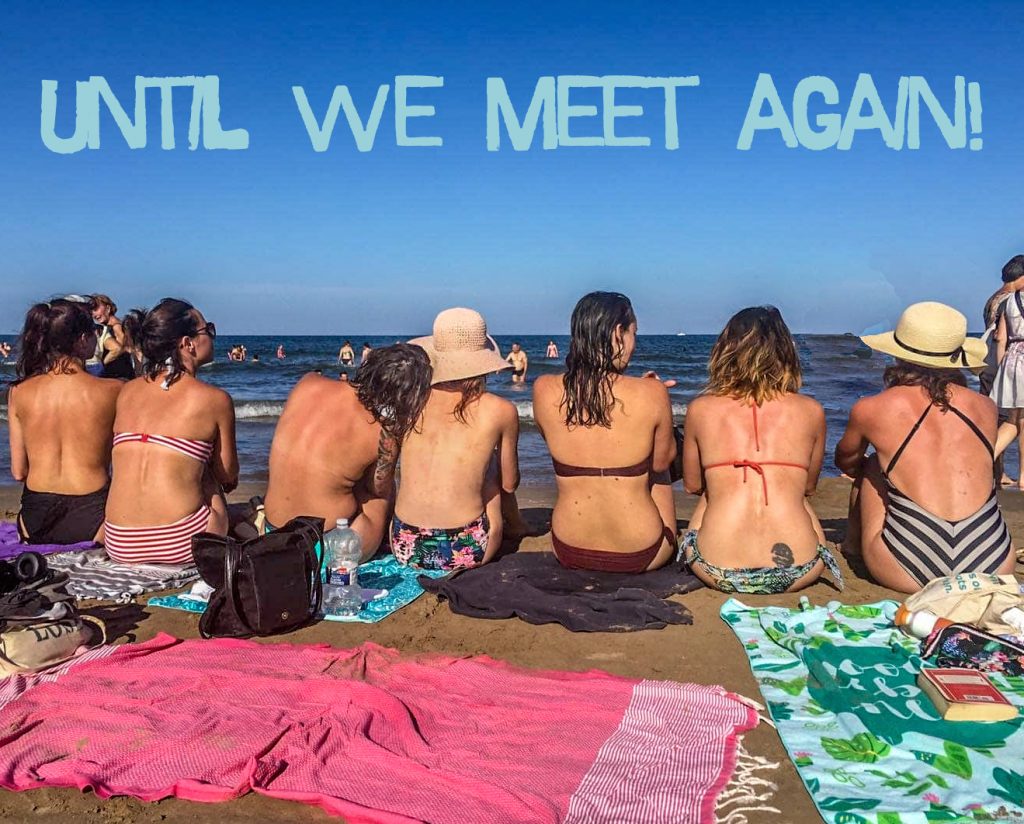 And then the last evening sets. We go for a dinner in a fancy fish restaurant with a terrace pending over the shore. A kind of venue that one of the girls got through a fake Tinder account from a Spanish hottie.
Another Sophie dresses up. I am wearing a long blue dress (thank you Beth), put on some sophisticated makeup (I’ve been watching you Alexia) and enter the restaurant with swaying hips (thanks for the tip Tara). Our table is set in the back of the restaurant and Beth and I are walking behind the rest, seeing the men staring at our pack and their women almost being indignant.  That’s how it feels to be sensual (times eight in this case), I think. Our waiter is having a hard time keeping his cool and hardly manages to open the bottles of wine, haha. Especially when we, all together, defend the rights of Sarah to choose vegetarian side dishes instead of fish. He literally jumps half a meter in the air and runs to the kitchen with our requests. Hilarious! We can’t stop laughing. Time for a party! 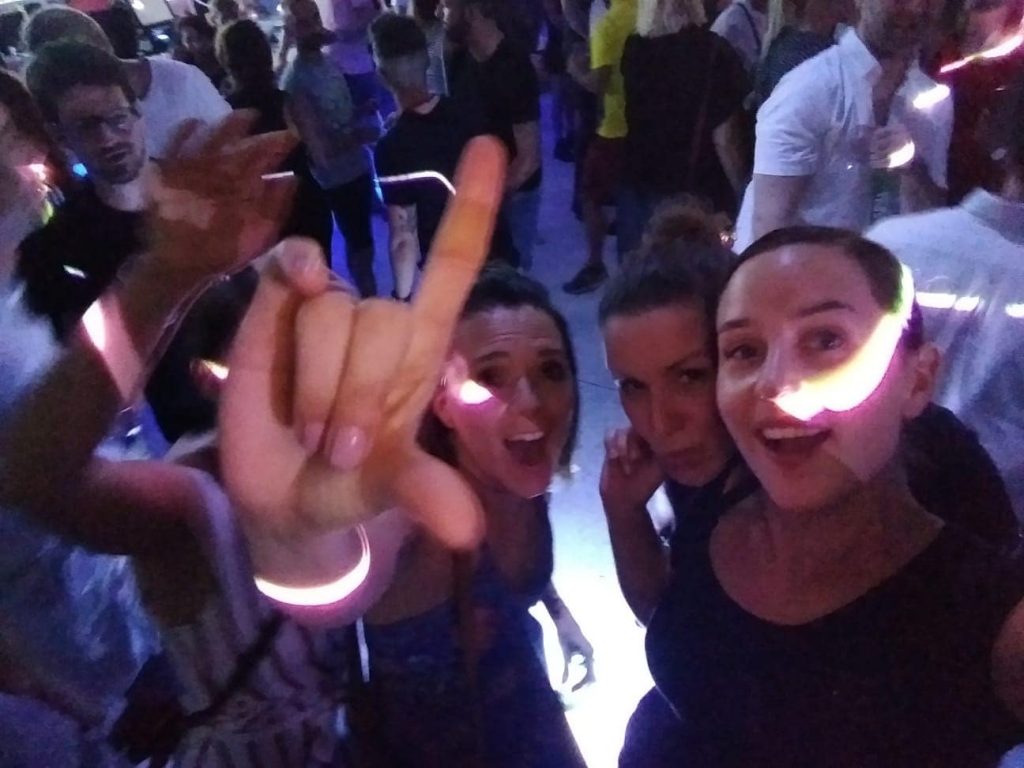 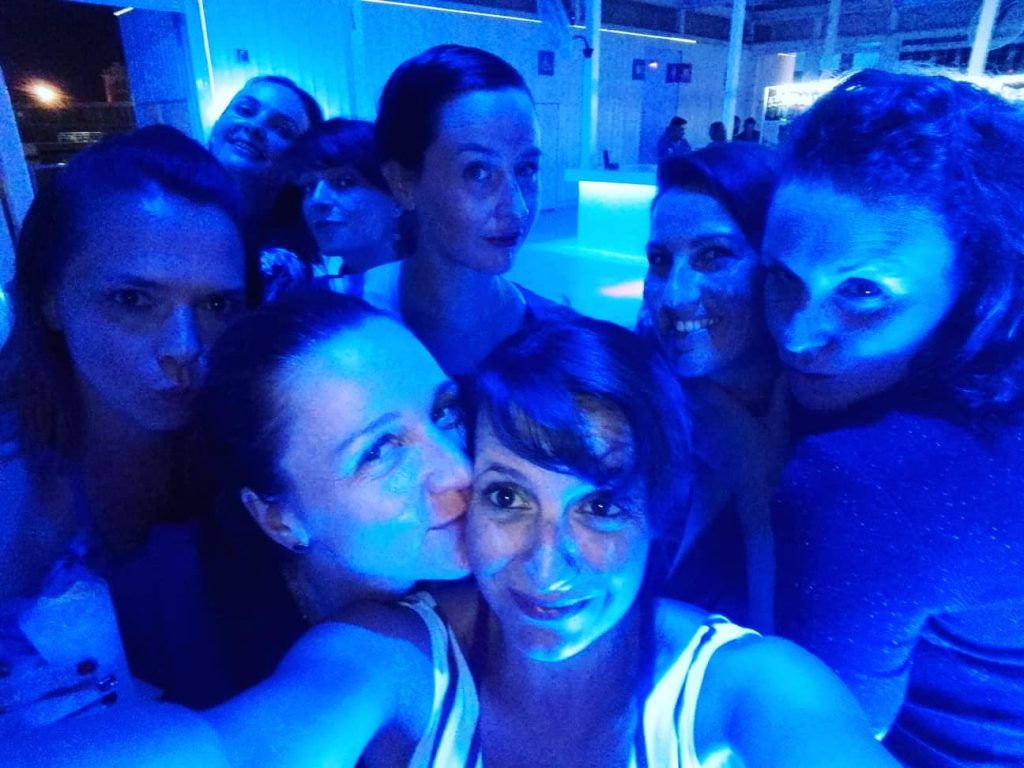 These women, my muses & rebels for the week. We film and take pictures of each other because we can all feel it: the empowerment of sisterhood. That, and the fact that everybody will have great sex once they get home. Their husbands & boyfriends are lucky, I already mentioned that!

Thank you, girls, this one is for you: http://www.konbini.com/ng/entertainment/drakes-nice-video-celebration-womankind/